Seasons Retirement Communities proudly announces a donation of 1,900 hams among nineteen food banks in the Alberta and Ontario communities where they operate retirement homes. 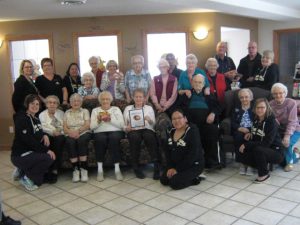 Last year in Alberta, Seasons acquired Sunrise Village retirement communities. Seasons will deliver a total of 800 hams to food banks in each of the seven communities where a Sunrise Village home is located, the week leading up to Easter.

Executive Vice-President, Resident & Guest Services, LeighAnne Voll says, “The HungerCount 2016 report tells us that, in small towns and rural areas, people accessing food banks tend to be slightly older and more likely to be living on a pension than the national average. This touches our heart as a company, given that most Seasons retirement homes are located in small towns and rural communities.  We want to join the fight against food insecurity for everyone, but especially for vulnerable seniors.”

Together, Seasons staff and residents will be delivering the hams to their local food banks.  Says Stephanie Walsh-Rigby, Executive Director of Food Banks Alberta, “We are truly overwhelmed by the generosity of Seasons Retirement Communities in providing nearly 1,000 hams for food bank clients in seven communities in Alberta for Easter.  Significant donations of high-quality protein for families are needed across the province and we are very grateful for this generous assistance.”