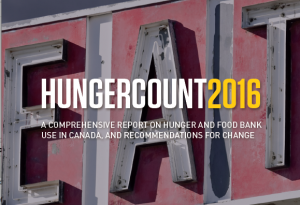 Eight out of 10 provinces saw an increase in food bank usage across Canada this year, but in Alberta it climbed by 18 percent to a record number of clients.

According to the national HungerCount survey released today, during the month of March this year, 79,293 Albertans accessed a food bank. That is the largest number of people to visit food banks in this province in the 35-year history of food banks.

Nova Scotia led the nation with an increase of 20%.

“What makes the figure in Alberta more disturbing is the data captures food bank usage for the month of March only,” said Stephanie Rigby, executive director of Food Banks Alberta, the provincial association of food banks.

“These numbers were collected before the massive wildfires in northern Alberta which spurred a dramatic spike in food bank usage in May. Those numbers have not completely disappeared,” she added.

Globally, the price of oil has not stabilized. Overall unemployment increased 1.5 percent to 7.1% from March 2015 to this March.

The economic landscape in Alberta has forced layoffs in all industry sectors – not only oil and gas. Companies continue to cut staff and rely on small teams of minimal staff. The housing market has not improved since 2015 and in some locations it has worsened.

Compounding the situation, while the job losses pile up and families struggle with lower or no income, the cost of basic needs – food and shelter – remain high. The costs of essential consumer goods and groceries remain high.

Food banks in Alberta reported that 25% of people who accessed a hamper program in 2016 are employed.

People are less stable in their jobs and are finding temporary employment. This lack of stability has resulted in prolonged food bank usage. Patrons are continually relying on the food bank for months at a time, as they struggle to find stable employment.

“Typically there is a percentage of food bank clients who are single-use visitors who need the assistance of a food bank once or twice in an emergency. Now, we are seeing an increase in returning clients who are struggling to find work in this economic climate,” said Gert Reynar, executive director of the Leduc Food Bank.

In the last two years food bank usage has doubled in Alberta. It has been eight years since the provincial low point of 33,837 individuals served in 2008.

Nearly all of the 84 food banks in the Food Banks Alberta network reported an increase in food bank usage. These food banks were heavily relied on to help evacuees throughout the Fort McMurray wildfire, and their need has not dissipated.

In Medicine Hat, the food bank has seen an increase in demand for its food bank programs. Families are relying on programs like the Brown Bag and United Way Healthy Bundles programs to make ends meet.

“It’s difficult to see families struggling, and children going to school hungry every day. This is why it is so important that the programs we offer continue to run,” said Tammy Vanderloh, co-executive director of the Medicine Hat and District Food Bank. “We rely on the generous support of our community to make that possible.”

Despite the pressures on food banks to cope with the increased demand, they continue to be innovative. Many work to connect clients with programs and resources to help move them out of food insecurity.

More than half of food banks are completely volunteer-run and rely primarily on public donations to operate. Food banks will need the continued support and generosity of their local communities as they help those in need around the province.